Last month, I was sick for ten days and when I wasn't sleeping or hacking up a lung, I was watching videos on Netflix. In the middle of night, I received a notification from a History app I recently downloaded on my phone. I followed the link, a picture appeared on my screen with a caption below that read "Today's picture is from 1912, and it shows a group of Native Americans on horseback. I do not recognize the peak in the background but hope one of you visitors could comment on where this picture might be." 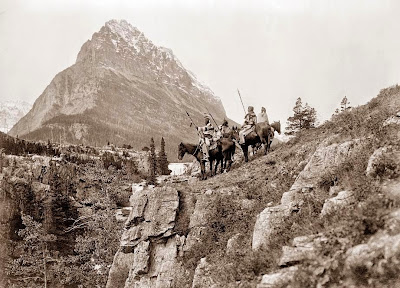 Montana Roadtrip 2010
My picture from 2010 is a scanned photo so the resolution isn't great. But you can still observe the flanks and ridges of Grinnell Point in the background to the right and compare them to the original 1912 photo above.

The Native Americans above were exploring an area. Dressed in the garb and Below, my buddies with their arms open, were the modern equalivent. Seeking a refuge from the modern world, attempting to find a new connection with the world around them. 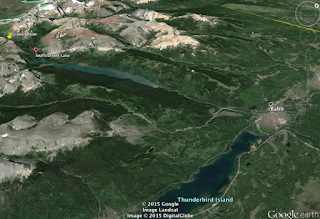 East side of Glacier National Park. This Google Earth photo shows the easy access to Grinnell Point from the Plains. Lake Sherburne can be seen between Babb and Swiftcurrent Lake.