Back To The Wild

I spent the afternoon in Western's Daylight Lounge reading "Back to the Wild", a compilation of photographs and letter from Chris McCandless, the main character from Into the Wild.  It's a true story about a young man from a affulent family who graduated from Emory University with a yearning for adventure. He began his journey in Virginia, and ventured West in his yellow Datsun, He adopted the nickname "Alexander Supertramp" when he took up hitchhiking after his car was wiped out by a flashflood.

If you haven't seen the movie, watch it. If you have seen the movie, this is a great supplement. While out West, Alex writes a letter to his friend in Arizona about his travels, which I've attached below.
This is a true story.
While there is much debate about the reason he left, how we survived as long as did, etc. etc The inspiration from his stories, letters, and pictures are simply incredible.

I've attached a letter from Alex Supertramp to Russ, an eighty year old friend from Arizona. (Let me know if you have trouble reading it.) 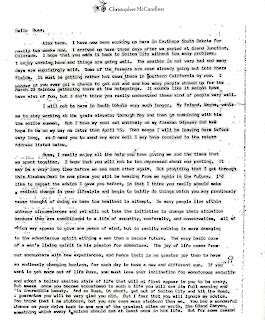 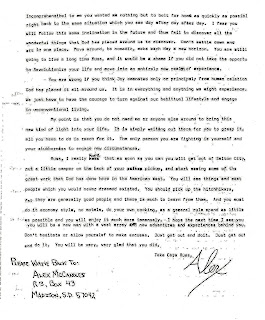