What if you can't walk a mile for Camel?

With all the cigarettes you've smoked, you can't even make it down the hallway without getting out of breath. So ask yourself again, what in your right mind makes you think you could walk a mile?  Your energy is solely concentrated on your next breath.

Life is ironic though. All those years of "being independent" have switched roles as you are only alive thanks to a machine. The years of the stress and damage your body endured with every "drag" is about to end. And you have no one to blame, but yourself.

As time carries on, you've found yourself in the Emergency Room hooked up to a thousand different machines that read your bodily signals. You thought you were intelligent and "independent" when you smoked.

You wake up in the middle of the night to discover the glare from muted TV overwhelms the room and you hear the commotion and screams of other patients in the hospital rooms around you. You should be golfing and enjoying your retirement, but your not. You can’t cry because you won’t be able to catch your breath. Your time is coming. It scares the living devil out of you. But the damage to your lungs is permanent, and nothing can be done to help you. Welcome to Marlboro Country!

Smokers don't understand the process that’s occurring within their body with every "drag" of the cigarette. (Working at a casino, I have the privilege of witnessing the effects of smoking first hand.) Throughout our entire life, I've been told that smoking will kill you, but nobody bother to explain how. In today's post, I'd like to explain the process how smoking will kill you.


When you take a drag on the cigarette, the smoke travels down the trachea into the lungs. Along the way, the smoke paralyzes the cilia that lines the esophagus. Cilia serves as a protection against foreign objects heading to the lungs, and they are responsible for pushing mucus up out of the lungs. When cilia is paralyzed, the mucus succumbs to the force of gravity and settles down in the lungs. Within the moist environment of your lungs, the condensation of smoke results in the creation of tar. The tar coats thousands of tiny air sacs called aveoli. The aveoli is primarily responsible for the oxygen and carbon dioxide exchange within the lungs. With time, your aveoli become covered in tar, and you can no longer catch your breath.

Tobacco smoke is also host to a number of different chemicals, including many carcinogens. Many of the lethal chemicals don't exist until after the cigarette is lit. Carbon monoxide is just one of the many chemicals, that is exchanged in the aveoli in the lungs. Your cells need oxygen and instead are receiving carbon monoxide. Smoking slowly poisons every cell in your body.

Different chemicals are added during the manufacturing of the cigarette. After harvesting the tobacco leaves are placed into a giant container dubbed the "Mother Liquor", where the tobacco becomes an aqueous solution. There other chemicals such as Ammonia, and Urea, (Yes, Urine) is added to the tobacco leaves to "enhance the absorption rate of nicotine in the user's body." Therefore within seconds of lighting up, the nicotine has reached the brain causing the infamous sensational nicotine high. This is one of the reasons tobacco remains more addictive than heroine or cocaine.
Smoking not only affect your lungs, but every other vital organ in your body as well. After traveling your lungs, the nicotine heads for your heart. Nicotine works as a stimulant, and in laboratory studies done on rats, "nicotine causes test rats and rabbits to go into convulsions, and then paralysis." Nicotine, in the human body, rapidly increases your heart beat, and then paralyzes and restricts your heartbeat.

Nicotine has a similar effect on your blood vessels. As the nicotine in the blood throughout your body, the blood vessels restrict. The restriction of your blood vessels occurs in your brain, causing headaches, and your limbs receive less blood flow, thus lowering temperature of your hands, and feed as your body focuses on keeping the abdominal organs warm.

As you grow older, the arteries surrounding your heart slowly harden and fill up with fatty materials in a process called atherosclerosis. Smoking increases this process by sevenfold. Your arteries and veins become more brittle as your arteries harden, and with smoking constricting your arteries, your blood pressure increases and astronomically increases your chances of having a heart attack or stroke.
In meantime though, bear in mind that cancer can affect everybody, there is no specific age. Lung cancer is extremely high among smokers for obvious reasons. Lung cancer is particularly interesting though, when cancer develops within the lungs, it is not simply contained within the lungs. The cancer soon falls into the blood stream and is carried to different organs where the cancer spreads faster than anticipated.


Consider this. Tobacco smoke contains thousand of chemicals including radioactive material such as Polonium 210. According to Centers for Disease Control and Prevention, Facts about Exposure to Polonium 210, "Po 210 emits alpha particles, which carry high amounts of energy that can damage or destroy genetic material" Months after you've quit, the tar that remains in your lungs still contains radioactive material, constantly agitating cell reproduction to veer off course, and produce cancerous cells.

According to Medical News Today, smoking disables a vital gene the protects our bodies from cancer. The gene is located in our lungs, and "The p53 gene makes sure that cells with damaged DNA either repair themselves or commit suicide. The article continues on saying "If p53 itself is damaged, which is the case in roughly half of all cancer tumours, cells that are on their way to becoming cancerous are allowed to survive."
If you somehow bypass getting cancer at a young age, maybe you'll be fortunate enough to get throat cancer, mouth cancer. Maybe your teeth will fall out before grim reaper calls you home. You could end up with COPD or emphysema. The tar in your lungs never leaves your lungs, and the damage done is permanent.  Whatever happens though Karen, her smoking cessation story on about.com, wrote that the age "you will live to see will not be comfortable or enjoyable"
Towards the end of your life, you will become a zombie.Your energy is geared towards staying alive. Similar to the video posted after this sentence, I encourage you watch the gruesome video in its entirety.  If not start watching the video at 4 minutes and 40 seconds. Youtube.com Thanks, Tobacco: You Killed My Mom URL Link http://www.youtube.com/watch?v=u_8BerrJg0M
Remember things don't have to be this way. You don' t have to be the living example of the essay. Just quit.
Personal Note
In August of 2009, I had the opportunity to travel to China with a group of students led by my political science instructor. While in Chengdu, China, we spent some time volunteering to help rebuild homes destroyed in the May 2008 earthquake that left over 79,000 dead. We helped out in the Jiang Jia Cun village, located on the hillside up from the former city of Beichuan. The following is an excerpt from my journal, dubbed the China Diaries, “We spent a better portion of the day chopping the mortar off the bricks, one by one. The sun is absolutely overwhelming, and my face just drips in sweat. My neck burns, and I’ve put on SPF 70 several times throughout the day. During one of my break earlier today, my eyes hiding behind my sunglasses, I watched our host's father, an older fellow, take a break and light up a cigarette. In sync with my pounding heartbeat, he'd take a drag, and cough violently. But with each cough, you were able to hear that his lungs were partially full of liquids. For a second, under the relentless sun, I felt helpless, and upset. He was miles and miles away from the adequate health care he'd need soon, and would probably die naturally without the use of morphine, or any other anesthetic. With no oxygen bottles to aid him, I knew he'd gasp for air as if it were his last breath. All along, the tobacco companies knew what they were doing. [August 26, 2009] 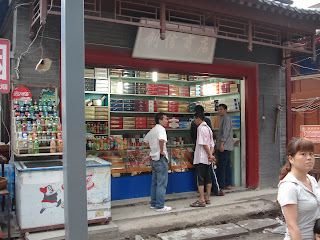 China currently has more smokers than the entire population of United States, and education on tobacco related illness is non-existent. Millions of people all over the world will die a slow and excruciating death. We maybe winning the war on tobacco here in the United States, but overseas, tobacco companies have only begun a new experiment. The picture to the left is located on Muslim Street in Xian, China. Hundreds of thousands of smoke shops are scattered throughout the country. There were many tobacco brand names from across the globe. In August of 2009, the cost for a pack of Marlboro Reds cost 10 yuan, or $1.47.
Posted by Tyler at 2:45 PM No comments: